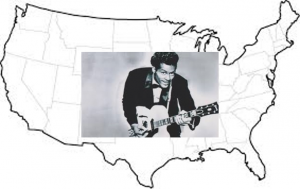 I see the following great principle of Aesthetic Realism, stated by its founder Eli Siegel, as true about every good rock song and about every individual person: “All beauty is a making one of opposites, and the making one of opposites is what we are going after in ourselves.” And at the same time, this principle is true about our nation as a whole. With all her turmoil and confusion, America is trying, even now, to be beautiful, to put opposites together.

In this post I will look at Chuck Berry’s lovable recording “Back in the USA” and ask: What can it tell us about what America is looking for at this time? Here’s how it begins:

At the very outset, Chuck’s guitar intro breaks forth out of nowhere with terrific eagerness, freedom, impetuous joy. Yet it’s all very exact; all those excited notes — many of them played in pairs (that is, on two strings at once) — keep a very strict beat even as they ring out with such excitement. And then there is that satisfying sense of curtailment as he plays a series of cascading notes sliding downward and ending neatly, squarely upon the whack of that drumbeat which is right on the downbeat and which propels us into the beginning of the song — and we’re off to the races!

It’s important to see that wherever freedom is really beautiful, it is always together with — is always the same as — fairness, measure, exactitude. Isn’t that what we want? Don’t we want to feel entirely free at the very same time feel that we’re being fair? The two mistakes I’ve often made have been to either cut loose and be “free” without much regard for what people or things deserved from me — or to strap myself down and be dutiful and rigidly “organized” while seeing life and existence itself as miserably dull. Art makes neither mistake.

And America, our dear country, wants its very freedom to be the same as justice to its own people and to the rest of the world—not to deny liberty to some for the purpose of giving free reign to a favored few.

In an issue of the journal The Right of Aesthetic Realism to Be Known editor Ellen Reiss writes:

Freedom is beautiful, necessary, a right—when it is at one with justice. But a notion of freedom which is not the same as accuracy and justice, is the beginning of all the evil of the world…The American Civil War occurred because persons of the South wanted to be “free” to own other human beings, to sell them, to do whatever they pleased with them… And there was the “freedom” to have child labor. Employers saw…any attempt to curtail child labor as an impingement of their—the employers’—freedom.
I could certainly give other examples of the ugliness of severing “freedom” from justice and accuracy. But for now the point is: our dear America is looking for the oneness of freedom and justice. Mr. Siegel wrote, for example, in 1968: “Perhaps then we should change a well-known term to Free-and-Accurate Enterprise; or, perhaps, Free-and-Just Enterprise; or, even, Free-and-Beautiful Enterprise.”

One of the delights of “Back in the USA” is the richness of diversity in its technique—its interplay of sameness and difference in sound. After the intro, drums, bass and guitar launch into a lively rock and roll stride as Johnny Johnson’s piano swarms up and down the keyboard. They contradict one another and get along delightfully. And I love how the backup singers come in on top of all this with that ragged, syncopated, alternating “Uh-uh-huh! Oh! Yeah! — Uh-uh-huh! Oh! Yeah!” Their voices, high and low, do not comprise what you would offhand call a lovely or graceful interval, but instead emit something kind of sour, sort of off, somehow wrong and yet so right at once. I love it. What diversity! What contradiction! And what a beautiful stew! And you’ll notice as the song goes along, with each new verse these backup singers keep changing it up — using different syllables and rhythms as they go. Meanwhile that driving beat holds it all together.

As Berry enters singing about the joy of “touching ground” on a flight returning from overseas, we can almost feel the landing gear descending and see the runway fleeting by below his window. He is embracing all that diversity, all that contradiction, and he doesn’t seem to mind a bit. Listen:

How much do we need difference — what is different from ourselves — just to be? The answer is, we need it very much. If all we ever met was just what we see as the same as ourselves, we’d go crazy the first day. We need the alphabet, food, metal, mountains, music, other people, and so much else. And I believe that America longs to be in a state where each of us not only “accepts” or “tolerates” people we see as different from ourselves — racially, economically, culturally — but where we honestly feel that we need people different from ourselves — and in fact need them to be different in order to fully be ourselves. This can seem so other than America as we have it now, but I believe it is what the people of America most deeply want.

Ellen Reiss writes in the issue of TRO I quoted from earlier:

All racism arises from seeing a person who seems different from oneself as only different. It is urgent now to try to have these opposites, so deep in America’s makeup, be one in how her people think about each other. Is a person different from me only different? How much is he or she like me too?…
When you see that another person has feelings as real as yours, you cannot be cruel to him. You cannot (for instance) exploit him economically. You cannot feel it’s all right for him to be poor

3. Self and Earth, Person and Nation

Getting back to the song, the sweeping poetry of the American landscape gets into the second verse with a listing of US cities, including the rhythmic line, “De-troit, Chi-ca-go, Chattanooga, Ba-ton-Rouge,” and culminating with Berry’s beloved hometown of “old Saint Lou.” Johnny Johnson’s piano now excitedly sails forth and ranges over the ivory continent, in a musical reflection of what the words are telling. Then Berry pays homage to the earthy physiognomy of America — its vertical and horizontal heights and breadth: “Did I miss the skyscrapers, did I miss the long freeway/ from the coast of California to the shores of the Delaware Bay? You can bet your life I did till I got back in the USA!”

His gratitude upon returning home from overseas he celebrates now with a joyous guitar solo. He is celebrating his connection, his belonging to the earth — not just any earth; the earth of the USA. But is the love being expressed just chauvinistic superiority: “My country is better than all those other countries”? I don’t think so. I think it’s in keeping with the profound emotion expressed in the famous lines of Walter Scott:

Breathes there the man, with soul so dead,
Who never to himself hath said,
This is my own, my native land!
Whose heart hath ne’er within him burn’d,
As home his footsteps he hath turn’d,
From wandering on a foreign strand?

That guitar solo takes ecstatic flight but never loses connection with the ground from which it springs: the basic rock and roll chord progression. And upon reaching the culminating tonic chord, it returns to solid ground.

4. Whose America Is It, Anyhow?

In the commentary I’m quoting from, Ms. Reiss asks:

Is it un-American to have one child be crippled from birth by conditions of poverty that she did nothing to create, while another is surrounded from birth with more luxuries than she can ever use? These questions are American questions. They are about the oneness of opposites—self and world, a person and a land. And inseparable from them is the question Eli Siegel said was the most important for humanity: “What does a person deserve by being a person?”

“Anything you want, they got it right here in the USA!” Chuck Berry exclaims in the song. He knew as well as anybody that not everyone in the USA is equally equipped financially to get those things. But there is such an easy confidence in the way, in the last verse, he describes enjoying the good things of this world that America has to offer, that he makes you believe it; he makes you feel: that’s right, this should be everyone’s birthright, of course! We all should be able to afford sustenance for our bodies as well as the sustenance for our souls that are represented in last verse in the form of food and art: the hamburger that “sizzles on an open grill” and a “jukebox jumpin’ with records.”

I’m saying that America is insisting now — and will continue to insist — upon putting together the opposites I have been writing about: freedom and exactitude, sameness and difference, self and Earth. The closer we get to seeing what this would mean—and Aesthetic Realism stands ready to teach us—the better we’ll all be able to honestly feel what Chuck Berry proclaims in this song: “I’m so glad I’m living in the USA!”

Here is the exuberant last verse:

Rock on, my friends!