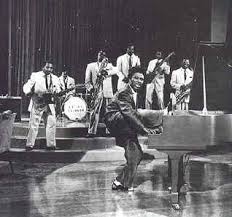 When Little Richard states in no uncertain terms that he is “the architect of rock and roll,” you might think there’s a touch of ego involved.
But the thing about it is: you can’t just say he’s wrong, either. Listen:


“Good Golly Miss Molly” mesmerized the world in 1958. It isn’t known whether the thrill of it will ever stop, but after all these years there has been no sign of abatement. Why? Why is this song about a girl out to have a good time so organically pleasing? I believe it is because of the way it puts together the opposites of freedom and order, explosiveness and definition.

In Is Beauty the Making One of Opposites? Eli Siegel asks about Freedom and Order:

Does every instance of beauty in nature and beauty as the artist presents it have something unrestricted, unexpected, uncontrolled?—and does this beautiful thing in nature or beautiful thing coming from the artist’s mind have, too, something accurate, sensible, logically justifiable, which can be called order?

In the breathless opening, Little Richard’s piano just takes off out of nowhere with three quick ascending chords that are at once wildly impulsive and terrifically precise–the third chord landing on the down beat. And as soon as that downbeat is hit, the whole band takes off—pulsing out a backbeat like nobody’s business. The drummer keeps a steady tempo accenting the 2nd and 4th beats, while other instruments play what is now a standard rock and roll figure—tonic-tonic, 3rd-3rd, 5th-5th, 6th-5th—- and the whole thing just barrels ahead with churning intensity while keeping always to that very definite structure. Here’s the intro again:

What we’ve just heard might seem like a headlong gallop, but it’s actually surprisingly symmetrical, even restrained in its tempo. Little Richard is putting opposites together.  With each new measure of that beginning, the piano gets ever more playful, rollicking, almost drunk with joy, while losing none of its confident self-possession, building to an ecstatic scampering among some of the very highest keys, returning down home to the sureness of the tonic note, and culminating with the entire band stopping on a dime—which dime also happens to be a downbeat. The effect of this stop is one of very satisfying neatness together with a feeling of mighty propulsion. Shot from this cannon comes the all-out, full-throttle voice of Little Richard singing, “Good golly, Miss Molly! You sure like to ball! When you’re rockin’ and a-rollin’ / Can’t hear your mama call!” We have something “unrestricted, unexpected, uncontrolled” and at the same time, something so accurate, so sensible, so logically justifiable.

Then we have a verse:

Okay, it’s not everything in the way of literature; but you do get a sense of all-out, day and night, unfettered giving of oneself over to having a good time! The verse streams out of Little Richard with an accent on continuity while the band has reduced itself mostly to just one chord on the downbeat of each measure, which is a rhythm called “stop time.” Again, strictness and freedom together, continuity and discontinuity. Then, breathless as ever, back we fly into the chorus. But, with all its intensity, let’s not forget the scientific looking at cause and effect that is going on here: He does state dogmatically and quite truly, that “rockin’ and a-rollin’” has the effect of rendering Molly incapable of hearing her mama call.

Another verse and chorus lead to one of the great screams in all of rock and roll recording; one of the multitude of things for which a generation of rockers (including the Beatles) owe Little Richard an enormous debt of gratitude. And then comes the gorgeous, wild, swarming, ecstatic instrumental bridge, where saxophone, drums, piano et. al, sound like they are having just the greatest blast of all time, with, again, great precision:

For so much of my life, my idea of a really good time was to get to a state of lofty, giddy mockery, often with the assistance of alcohol or a drug, while giving very little thought to other people or objects. I wanted to think I knew how to “cut loose” and feel free. Then, I could insist on orderly, predictable routines. For example, during one period I made myself a scrambled-egg sandwich every single morning for an entire summer, until I reached a point where I couldn’t even think of eating an egg for ten years. Both of these–the wild mockery and the rigidity–made me feel dull and half alive.

I learned from Aesthetic Realism that the bad freedom and the bad order I went after came from my desire to have contempt. In my pursuit of freedom I tried to get away from things and people, and in going for order I’d grimly try to make them obey my wishes. I felt life was mostly colorless and grinding, interrupted by the occasional fleeting sense of release. Aesthetic Realism criticized my contempt and enabled me to see a world of meaning, richness, color and excitement beyond what I ever knew could be. And the surprise was that it was the very world I’d been in all along! The extreme rigidity I once felt has gone, and I don’t suffer as I did with a feeling that freedom and “being sensible” have to battle in me.

An example of my education was in an Aesthetic Realism class some years ago. I said I that I hoped to have big feeling about something or someone but then would find myself surprisingly cool, and I’d worry, “What’s wrong with me?” Ellen Reiss asked, “Do you think something in a person wants to feel duller and less alive?” And, “Do you think having a big emotion about something else, you’ve made in a fight with the world having a big emotion about you?” The answer was yes!–and I was thrilled to see this, because I knew it could change. Aesthetic Realism has given me a happy life that includes my marriage to singer and actress Carol McCluer. Through knowing her, I’m both freer and more exact; more the man I want to be. I’m fortunate to know now that I can let go, have a rip-roarin’ good time, and feel at the same time my feet are on the ground.

The musicians on this recording know exactly what they are doing. What they build together is “accurate, sensible, logically justifiable,” and man, is it ever free! And if you thought Little Richard gave it all in the first choruses and verses, get ready, because he totally smokes on the last parts.  I love Aesthetic Realism for making the very things we’ve loved true agents of the deepest education for ourselves. Here is the rest of that great recording: