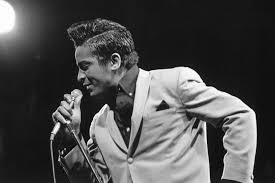 I love Eli Siegel for giving humanity this kind, scientific and revolutionary principle of Aesthetic Realism: “All beauty is a making one of opposites and the making one of opposites is what we are going after in ourselves.” In the Aesthetic Realism lesson he gave to a young musician, Bob Walker, I believe he explained the essence of rock and roll, and the reason millions of people have loved it and do love it. In that lesson, Mr. Siegel said:

Rock and roll puts two things together. Have you found in rock and roll a sense of assertion and agony?
Bob Walker: Yes.
Eli Siegel:  This has the answer to people’s problems. On the one hand, they want to be very private and sad, and on the other, they want to have something like sunlight and public force… I would say that every person has to make a one of the most secret thing and the most public thing. And rock and roll says that that can be done… The big principle is that if you listen to it there seems to be the utmost pain and the utmost assertion… You have the most terrific woes… the words [are] mostly about, “How defiantly alone I am!” It’s the tremendous assertion of loneliness… There’s something unabashed about it–also in control.

Hearing this for the first time, I thought, “This explains as nothing else ever has what I have felt!” Listen to the beginning of Jackie Wilson’s “Lonely Teardrops”:

I think this great 1958 recording does what Eli Siegel described: it puts together assertion and agony–private inner feeling and public outburst–in a beautiful way. And I’ll say here what I know many people have felt: the singing of Jackie Wilson on this recording is truly great! The song was written by Berry Gordy, Gwendolyn Gordy and Roquel “Billy” Davis. Here are the lyrics–they have, as Mr. Siegel said, “terrific woes.”

The music begins very dramatically with a single drum beat. This lonely drum beat is on the upbeat, preceding the first full measure of the song, and is immediately joined by a whole flood of sound–the band and the big sound of female and male voices singing,  “Shoo be do wop, bop, ba.” On that last syllable, “ba,” the voices all swoop downward in a kind of cry or groan; but it is done so neatly, with such style and in such a swinging rhythm that it also sounds very cheerful.

At this point, Jackie Wilson begins singing the word “Hey” three times. The way that first “hey” soars, wanders, retreats and swells is agonized and triumphant at once.  At the end of the third “hey,” all the voices and instruments stop. After a brief silence, we hear Jackie Wilson’s voice alone sing, “My heart is crying, crying…”

Following this, the only thing that next breaks the silence is that single drum beat, just like the one that began the song. Again it is on the upbeat preceding a new measure, and again it is followed by a large rush of sound as all instruments and voices return with Wilson singing “lonely teardrops” and the background singers, “Shoo—oo-be-do wop, bop, bop.” In the lesson, Mr. Siegel asked Bob Walker about rock and roll, “Do you think it’s the blare of agony?” Listen:

I love that one drum beat in the midst of silence, which happens at several places in this song. In the lesson, Mr. Siegel pointed to the dramatic relation of silence and “great sound” in rock and roll, and he related it to what he called “the largest purpose of a person… to make a one of the utmost secrecy and the utmost relation or public meaning.” I feel that drum beat has tremendous heartbreak and tremendous pleasure at once. You can feel the pang going straight to the heart and at the same time the composing pleasure of that sure, reliable beat as it propels the song on into the next richly textured passage of sound. With all the loneliness and sorrow in the words, the music sounds nevertheless like a joyous celebration. Rock and roll, Mr. Siegel said, stands for “the desire of a person to unburden himself as if he were an earthquake.”

In this and other parts of the song, there are strummed and plucked notes on muted guitar strings that stand out in time like individual teardrops. They sound painful and playful at once. Also those background voices, including the very high female voices singing in the middle of the song–and repeating at the end–the phrase, “Say you will!” are both excruciating and exhilarating.

Through what Eli Siegel said in this lesson, I feel understood in terms of why I have loved rock and roll so much. From very early in my life, I had a sense of being more and more encased in myself and hidden, which I later learned came from my own desire to have contempt–to feel falsely apart from and superior to the world and people. Aesthetic Realism explains that every person is a continuous fight between our hope to like the world, which is our deepest desire, and our hope to have contempt for it; to get “a false importance or glory from the lessening of things not oneself.” I am seeing now how much my care for rock and roll stood for my hope to break out of that painful isolation.

In the lesson, Mr. Siegel spoke to Bob Walker about what he has called “The Ordinary Doom”–the very common feeling had by people that one is largely unknown by others. “Do you think you have that?” he asked. Bob Walker answered “Yes.” Mr. Siegel continued, “And do you think the purpose of rock and roll is to shatter it? … People are tying to be proud of their pain, not be skulking about it… There is a desire to take one’s private life and to have a train caller give it.”

While I also hoped my hiddenness would be shattered, it never would have been except for the criticism I heard in Aesthetic Realism consultations, and then in classes taught by Chairman of Education Ellen Reiss. I was fortunate to hear questions that changed me very deeply, such as, “Do you think the outside world and other people are good enough for you to show what you feel?”

I am grateful for the fact that I have been known truly–and continue to be–by Aesthetic Realism, including thoughts and feelings that I once felt would never meet the light of day–and for the feeling I have more and more that my inner life and the outside world are coherent. My happy life includes my marriage to Carol McCluer, our life together with our daughter Sara, and many honest and enduring friendships. I am lonely no more!

Eli Siegel said rock and roll stands for our hope to “make a one of the most secret thing and the most public thing.” I feel this is true about “Lonely Teardrops,” and I thank Aesthetic Realism for enabling me to see its beauty and its meaning.
Listen to the remainder of the song: