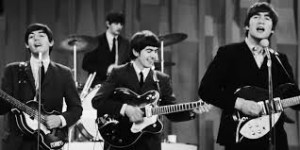 Is there any such thing as music without resistance in it? …Music is always a study of advancing with opposition, and there couldn’t be music without it.

I’ve seen this is true, and one illustration is the Beatles’ wonderful 1964 recording, “I Feel Fine.” Listen:

With “I Feel Fine,” the Beatles’ made recording history–one of their many firsts–by beginning a song with electronic noise: feedback. You wouldn’t think you were about to hear a song about “feeling fine”–the way that edgy guitar sound just burns into you. Then the guitar, played by John Lennon, suddenly launches into an excited, rhythmic, inward-turning pattern that descends and leaps, is bright and dark at once. It does sound energetic, but also tangled and difficult. I think this is because the pattern, while based on a D major chord, gets in a flatted or “blues” 7th note, which brings in a sound that seems mournful, sour.

The guitar now slides down a whole step and repeats this  pattern over a C major chord, then slides down to the tonic or “home” note of G, and repeats the pattern twice, with bass and drums now joining in—and in each repetition, we have that “blues” 7th, contradicting the brightness of the major chord.

I think this is one of the greatly inventive openings of any pop recording ever. I remember the winter of 1964-65 and the feeling of instant delight that I, like millions of people, got whenever this song came over the radio. I didn’t know then that I loved it because it answered a big question of my life.  Like many young men—and women, too–I felt I was constantly beset by difficulties: at school, at home, even with friends. I’d groan: “Why can’t things ever go smoothly? If things were easier, I’d be fine.” But this song, in its structure, is saying that real happiness can only be had with some kind of acceptance, embracing even, of difficulty or opposition. John Lennon sings:

Happy words. You almost couldn’t get any happier. Yet in the melody there isn’t only ease. For one thing, that flatted 7th we heard in the guitar opening is here in the melody too. I learned that the verses of this song are not in a major key or a minor key. They are in the mixolydian mode, a scale that differs from the major in that it has—you guessed it—a flatted 7th. That 7th is in, for example, the second syllables of  “Ba-by’s” and “hap-py” in the first two lines. Does that sound only blithe and untroubled, or is there something unsatisfied too?

And the melody as a whole is tight; it strives up and down in small steps and seems limited. Yet the sound of struggle makes the joy more believable. John Lennon’s singing is passionate, celebratory–yet also seems laboring in a cheerful way. Then, a burst of brightness comes in the refrain, as George Harrison and Paul McCartney harmonize with him on “I’m in love with her and I feel fine.”

Now comes a big change: we go from the mixolydian mode to the key of G major, and the Beatles go into one of their gorgeous, trademark rainbows of harmonized sound on:

On that first phrase, “I’m so glad,” the harmony descends from G major to B minor. And while we feel a sigh of pleasure and relief–like falling into warm and welcoming arms–the minor also implies something other than just comfort: there’s difficulty—the opposite of complacency, and that minor chord falls–of all places–on the word “glad.”

Like most men, I made the mistake of seeing love as a chance to be admired by a woman, get pleasure and comfort from her without giving much thought to what was in her mind or what she hoped. I was complacent. Men have often felt, “She’s in love with me! Hooray! Now everything’s ok: Nothing to question, nothing to have to know, or make sense of,” including in the woman herself. And inevitably, we have let a woman down, and let ourselves down.

Early in my marriage to Carol McCluer, I was in a state of combined guilt and anger: guilt because I knew there was more she hoped for from me that I wasn’t giving in terms of thought, and resentment that she didn’t see me as already wonderful and “fine” as I was. I knew I needed to learn about myself, and in an Aesthetic Realism class, told Ellen Reiss that I hadn’t wanted to “do the work” of knowing my wife. Ms. Reiss asked me if I saw knowing as a very difficult thing.  I did, and she said:

Do you think it’s possible to have a delightful time knowing Carol McCluer?… You’re advocating the idea that what will make you happy is to be adored. The question is, are you right?… If knowing is not a joy, then Aesthetic Realism is wrong.

This discussion made for a change in me, because I wanted to have a different purpose—to have good will; and our marriage has grown deeper and more romantic–also more joyful–with every year. Joyful, because I continue to see real evidence that knowing my wife, and people as such, makes for real pleasure.

The music of “I Feel Fine” tells us that happiness is not something you just loll around in, but something you strive for.  The climax of the song comes in the guitar break at its center. At this point George Harrison’s guitar work brings a new sense of energy and release. It seems both to “work” harder and also glide more joyfully than ever. Harrison then hands the solo back to Lennon. All the other instruments stop, while Lennon barrels ahead triumphantly with that same riff the song began with. As he did again and again so greatly, Ringo now brings an artful flourish that stands out boldly, and yet is perfectly fitting to the song at once. His syncopated outburst that leads the guitar solo back into the song–both fighting the beat and propelling it forward–is a thrilling moment, and a big part of what makes this song so fine.

I love Aesthetic Realism for explaining that what thrills us in music shows us how we want to be. Here is the conclusion of the song beginning with those guitar solos and ending with John Lennon’s wonderful groans of pleasure: “Ooh-mmm.” It is, I believe, a musical illustration of this fact: that only through wanting to meet the world fairly — even with all its difficulties and obstacles — can we get to the honest joy and release we are so deeply hoping for! Here’s the remainder: