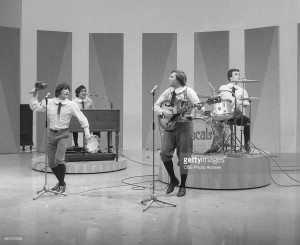 The year was 1966. The American congregation of rock ‘n roll faithful had been for several years deeply enthralled with all things British – beginning with the Beatles — who were soon followed by the Kinks, the Zombies, the Moody Blues, the Rolling Stones and more. And while these bands insisted they were merely bringing us the very American music that they had come to love, nevertheless it seemed to us so new – not unrelated, not utterly different from, say, the energy and tumult a half a generation earlier with Little Richard, Jerry Lee Lewis and Elvis – but different nevertheless.

Then a new thing happened. From right here on our own side of the water there arose a uniquely American rock band unlike any we’d heard, and they took our hearts in one sweep, beginning with this:

These are The Young Rascals, who later changed their name to simply The Rascals: Felix Cavaliere, organ and lead vocals; Eddie Brigati, percussion and vocals (sometimes lead); Gene Cornish, guitar and vocals; and the great Dino Danelli on drums. Their first giant #1 hit, “Good Lovin’,” of which you just heard a part, does what the Rascals continued to do in all of their best recordings: they put together the opposites of ecstasy and control, logic and emotion. In “Is Beauty the Making One of Opposites?” Eli Siegel asks about logic and emotion:

IS there a logic to be found in every painting and in every work of art, a design pleasurably acceptable to the intelligence, details gathered unerringly, in a coherent, rounded arrangement?—and is there that which moves a person, stirs him in no confined way, pervades him with the serenity and discontent of reality, brings emotion to him and causes it to be in him?

In loving The Rascals’ music, I believe we felt these opposites—so far apart in us (they certainly were in me)—were being presented as wonderfully, joyfully together in sound. The opening of Good Lovin’ certainly has a logic: It is a simple, spoken count, “1, 2, 3,” as a start-off to the song. This technique, used by musicians worldwide to “count in” to a song so that everyone begins together at the right tempo, and which audiences are usually not supposed to hear, is here part of the performance of the song itself. It is swift and rhythmically exact. Yet, surprisingly, each number is called out—almost shouted– with a somewhat different inflection and –each by a different member of the band! That, of course, raises the question, “Who gave them the tempo?” Each man had to feel that tempo and also see it as having an outside, impersonal life of its own. So, the simple logic of “1, 2, 3,” takes on a lot of dimension.

Continuing the momentum, the backup singers begin the repeated phrase “good love!” And by the time we hit that word “love,” the band is in full swing with guitar, organ, bass, tambourine and drums playing the first chorus. It’s ecstatic, impetuous, wonderful, and at the same time quite methodical; its “details [are] gathered unerringly, in a coherent, rounded arrangement.” Organ and guitar repeat the same up and down pattern again and again—happily but dependably–as tambourine and drum hit the 2nd and 4th beats of each measure, and every 2nd measure is punctuated by that phrase “good love!” And even as the backup singers keep joyously impelling the song forward with that repeated phrase, it’s always neatly shaped by the harmonized voices, and perfectly timed. Rounding out the chorus, Gene Cornish revs up the emotion with growling, sliding figures on the guitar’s lowest strings while Danelli plays mischievous-yet-exact taps on a cymbal top. The whole thing “moves [us], stirs [us] in no confined way.”

A big aspect of both the precise logic and the verging-on-overflow emotion of this recording is the wild, humorous and exact use of call-and-response, both in the verses and choruses.

Cavaliere’s singing is all-out, passionate, as he complains, “I was feeling so bad…” and tells that he went to the doctor to find out what he needed to get better, explaining, “I said Doctor…” And right away here come the excited back-up singers including that high harmony of Eddie Brigati, “Doc-to-or!” The lead singer continues, “Mr. MD…” and here they come again, “Doc-to-or!” And what bit of logic does the man of science provide? The music builds to a fever pitch and the answer comes, “Yes indeed; all I really need…” “Good love!” shout the backup singers, and the chorus, like the verse, also becomes an excited-yet-precise round of call and response.

The second verse presents a logic that men have tried on women with varying degrees of success from time immemorial: “You know, I’m not feeling very well at all, but if you would just make love to me, I just know it’s the one thing that would make me better!” But when have we had an actual prescription to back it up? He sings:

Honey please squeeze me tight.
Don’t you want your baby to be alright?
Baby, it’s for sure:
I got the fever and you got the cure!

In customary life, this tricky, cajoling stuff is bad because, not only is the logic faulty, but it comes from a bad emotion—the desire in a man to have his way with a woman without hoping to respect her and show himself to her honestly. It’s contempt. But in the song it’s wonderful because it’s done with such beautiful, joyous form, as when the backup singers respond to the lead singer’s key phrases, “squeeze me tight”, “be alright”, “it’s for sure”, “got the cure!” There is logic in the timing and structure of how phrase meets phrase, and big feeling is at one with mathematical precision. The third chorus concludes with a wonderful scream – and even that begins and ends with perfect timing.

I have made a split in my life between logic and emotion. I’m grateful to Aesthetic Realism that this is so much less than once, and I hope to change even more. Once, after having had the thrill to perform in a musical presentation at the Aesthetic Realism Foundation, I commented in a subsequent class that through that experience, I saw more that being just is a good time. And Ellen Reiss said to me, “And do you also see having a good time as just?” Explaining, she said that people often feel that when they are gloomy, cynical, burdened – that that is the time they think they are most savvy, aware, keen, logical–that that is when they are seeing things as they really are. She asked whether that might be true of me. It definitely was. I began to see so many instances of how ready I was to pat myself on the back for how “logical” I was when I could find something wrong with something or someone. I also saw that that miserable purpose was making me so much less happy than I might otherwise be, and I changed. To learn from Aesthetic Realism that the purpose of our lives is to like the world through knowing it makes for such pleasurable and proud emotion and is based on the most solid logic.

I believe the Rascals’ music is loved because at their best they made a one of ecstasy and control, logic and emotion, as can be heard in this brief sampling of some of their recordings:

Good Lovin’ continues with an excited, swarming organ solo by Felix Cavaliere. Reaching a high point, it ends abruptly and is followed by silence—one of the famous silences in recorded pop music. This silence is exciting as it leaves us wondering when the music will return. It’s got a mischievous, unpredictable quality. One reason that is so, I think, is that the organ solo stops not at the end of a measure but on the first beat of a new measure. So, as the silence goes on, we’re unsure of where to beat should be. Then, when the backup singers return so precisely with “good love!” and hurl us into the concluding section, it’s always a breathtaking surprise.

The concluding call-and-response chorus builds in intensity– crying out again and again for love–the band and singers arrive at an absolute fever pitch, and finally the whole piece ends on a dime. Emotion is busting out at the seams all through this recording, and every ounce of it is contained in a careful, logical framework.

God bless you, Young Rascals! You started a flame in millions of hearts around this globe that can never go out. I’m grateful to be the possessor of one of those hearts. And I’m grateful beyond words to Eli Siegel for his principle of Aesthetic Realism which explains how it came to be. “All beauty” he said, “is a making one of opposites, and the making one of opposites is what we are going after in ourselves.”